It all started when “The Story of Chickens” art project came to town. The artist’s plan was to display a group of chickens in a mobile pen for 30 days and then publicly kill them and serve them to her audience as a meal.  As I struggled to understand how such an atrocity could be considered “art,” I called city hall and learned, to my relief, that such activity was illegal within the city limits.

What happened next brought beautiful creativity into the process. Once she learned that her plan was illegal, the artist was quite open to our suggestions to use no live chickens at all and involve our animal rights group--Animal Outreach of Kansas (AOK)--in her work.  She allowed us to display many works of art that were respectful of chickens in the month-long art display at the gallery.  At the end of the month, she hosted a potluck at the gallery and allowed four of us to speak to the audience about the rights of chickens.  What began as an impending tragedy was transformed into an opportunity to educate people about the rights of animals and their desperate need for liberation from human exploitation.  I give the artist a lot of credit for that. Karen Davis of United Poultry Concerns, who helped us throughout the campaign, published a more detailed account of the event in the UPC article, The Story of Chickens: Closing Night 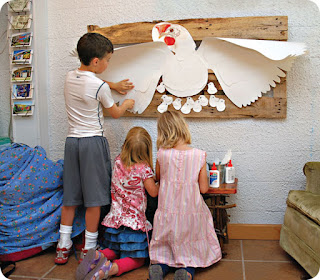 An interactive art display honoring chickens at the gallery by Anna McCoy.

Still, a nagging question hung in the air-- how could the original art project ever have been considered “art” and given a grant?  And how could there be so many other animal abusing “art” projects that have caused the suffering and deaths of so many sentient beings?  A few examples include: the killing of a chicken in a school cafeteria as a filmed art project; setting fire to three live rats; the killing and displaying of 9,000 butterflies; throwing cats up a flight of stairs; the filming of a man holding a fish while he or she slowly died; and the strapping of LED lights to the legs of 2,000 pigeons and forcing them to fly at night, causing many to die.

It is safe to say that most of these works of art, if done by a non-artist, would be considered animal cruelty and possibly prosecuted.  Artists understandably demand free expression, yet none of them would claim that harming, killing, confining or using a human being in such ways would be accepted as art in today’s world. Respected animal rights artist, Sue Coe, whose drawings of animals help awaken people to the horrors they endure at human hands, makes it clear that we must bring an end to all use, abuse, killing and eating of animals. Mary Britton Clouse, of the Justice for Animals Art Guild, states, “Art is about ideas. Animals are not ideas. They are as real as we are.  Their suffering and deprivation are psychologically and biologically indisputable. . . . No act of self-expression is worth the life or liberty of another.”

So what do we do as animal activists?  Minding Animals International has just introduced a powerful new tool that will help us bring an end to using live animals in art.  That tool is the  Minding Animals Curatorial Guidelines One of the goals of the Guidelines committee was “to identify and avoid human exceptionalism/anthropocentrism, which prioritises humans over animals. Key to CAS [Critical Animal Studies] is a critique of capitalism and globalisation in its role in the domination of people, animals and the earth, but CAS also sees the intersections of all oppression anywhere and for whatever reason as motivation for employing the powerful forces of compassion and social justice...”  This revolutionary set of guidelines for artists and curators will be introduced at the International Minding Animals Conference in Mexico City in January, 2018. Carol Gigliotti, Yvette Watt, Jessica Ulrich and Rod Bennison are the main authors of the guidelines. They are also the panelists of the discussion that will take place at the Minding Animals Conference.  They describe the panel as follows:

“Animal Art Exhibitions The growth of Animal Studies as a field has been mirrored by the increasing number of animal themed artworks and exhibitions. However, many artists and curators do not properly consider the impact of the artworks and exhibitions on perceptions of nonhuman animals, and on the individual animals themselves. The result has been numerous examples where the animal has been treated disrespectfully, marginalised, exploited, and caused physical and/or behavioural suffering. Animals have been killed as part of or for an artwork. The three panelists, along with Rod Bennison, were charged with developing Curatorial Guidelines for Minding Animals Exhibitions. Designed to avoid inappropriate and unacceptable uses of animals as subjects for artworks in exhibitions connected to Minding Animals International conferences and events, the guidelines may serve as a model for other curators in situations such as galleries, museums, performance spaces who are faced with similar decisions in their choice of what artworks and performances should be supported. The goal was a positive one of opening doors for curators to consider their choices in the wider and increasing context of respect and concern for all animals. This respect and concern includes acknowledgement of animals’ intelligence, consciousness, agency, and creativity and therefore is supportive of the creative impulse rather than attempting to limit it. The panel will discuss the process of defining these guidelines and consider what ideas were of utmost importance and the language to convey that: such as both wild and domesticated animals’ needs and rights, artistic freedom, ethics, the meaning of art and its limits. Additionally, the stakeholders in this process will be discussed and the discussions and handling of disagreements and multiple considerations examined…”

In addition to this ground breaking panel and set of guidelines, of course, we also have the help and vision of Compassion Arts, vegan and activist artists, ethical university professors and art museum directors, and many others.  Together we can find ways to establish firm vegan policies prohibiting all use of living beings in art projects around the world. AOK is currently working with a local art museum to initiate such a policy. I welcome any advice and am also available to discuss any similar projects you may have.
Judy Carman, M.A
Judy Carman is the author of the award winning Peace to All Beings: Veggie Soup for the Chicken’s Soul; and co-author with Tina Volpe of The Missing Peace.  She is co-founder with Will and Madeleine Tuttle of Circle of Compassion and the Prayer Circle for Animals Facebook. A recipient of the Henry Spira Animal Activist Award, she founded the Animals’ Peace Prayer Flag Project; co-founded, with Lisa Levinson, the Interfaith Vegan Coalition;  and co-founded Animal Outreach of Kansas.


POSTSCRIPT--I just received this link to an article about vegan art supplies that are made without harming animals.  What a great resource for vegan artists.  Thank you Sue Coe for this valuable information.