I had noticed the For Sale sign on a small forested property for quite a while and hoped that whoever bought it would respect the trees and the wildlife there.  Then one sad day I discovered that the sign was gone, and so were the trees.  In their place a few fence posts stood, signaling the next stage of destruction to be caused by too many animals crowded together with nowhere else to go.  Although you can’t see it in the photos, the dozing of trees goes all the way down the steep hill to the creek.  This creek is already polluted by animals upstream as well as by pesticides, herbicides, and fertilizers used to grow food for animals.  This newly denuded pasture will compound the pollution and add even more to the Kansas River as it carries soil, toxic debris and chemicals down to the Mississippi and into the Gulf. 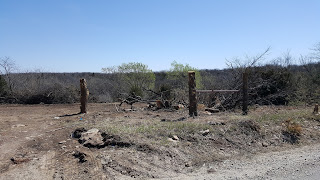 In the grand scheme, this seems a small blip on the radar, but in truth, as we all know, this is just a tiny microcosm of what is going on worldwide to grow animals to kill for meat and to grow grain for them.  This is what indigenous people in the rainforest see happening every single day—and for the very same reason—animal agriculture. Many activists who have protested the slashing and burning of their forests have been killed for their actions.

In his book, Carbon Dharma: The Occupation of Butterflies, Sailesh Rao uses the metaphor of caterpillars transforming into butterflies to describe what our species must do to repair the damage we’ve done to the earth.  Caterpillars are voracious eaters.  They are little eating machines, but when the time is right they surrender to the miraculous process of disintegrating and then reintegrating into butterflies who set about replacing what they consumed so that their children can survive too.  They do this by eating very little and pollinating plants so that more can grow.  Our species, by contrast, has become a huge and destructive eating, consuming machine that has not surrendered to the call to become butterflies.  What will we leave the children if we persist?

That little piece of paradise that I described above was a home for many animals and birds.  Now it is bare dirt.  That was some caterpillar!  How interesting it is that a company that sells 300 different machines specifically designed to dominate nature is known as Caterpillar  From Asphalt Pavers to Wheel Dozers, Homo Sapiens is well equipped to take apart and consume everything on the planet, leaving an uninhabitable home for the children of our own and all species.

According to Gus Speth, Yale’s Dean of Environmental Studies, as long as we keep doing what we are doing, we will “leave a ruined world to our children.”  He states, “It took all of human history to grow the $7 trillion world economy of 1950.  We now grow that amount in a decade.” (from his book The Bridge at the Edge of the World)  Well, at least some of the caterpillars are well fed.  But, as we know, that “growth” has left a huge portion of humanity, nature, and wild animals struggling or simply unable to survive and caused immeasurable suffering to billions of farmed land and sea animals.

The unrelenting hunger for this “growth” affects animal agriculture just as it does all the other industries.  But animal agriculture has a special advantage.  David Simon’s book Meatonomics: How the rigged economics of meat and dairy make you consume too much and How to eat better, live longer and spend smarter, makes the case that there are “externalized” costs that we all pay to prop up the meat and dairy industry.  In addition to the already well known environmental, nutritional, and ethical costs of this industry, he adds the costs to all of us economically.  There are huge hidden costs to all taxpayers in every hamburger, egg, glass of milk, etc.  This is because of government subsidies that have been won by the powerful animal agriculture lobbyists that seek to sell more meat, dairy, and eggs, with zero regard for the damage being caused to all life forms, including us.   The introduction to Simon’s book states, “A $4 Big Mac really costs society about $11, and regardless whether you even eat meat, you incur a share of $7 in external costs each time someone buys a burger.”

Because of government subsidies hog farmers spend approximately eight dollars more raising a pig than the actual sale price of the pig.  Likewise, it costs corporate cow producers $20.00 to $90.00 more than the cow will be sold for, according to Simon. He estimates that, “Each year, American taxpayers dish out $38 billion to subsidize meat, fish, eggs, and dairy.”  The costs to human health are yet another hidden price to pay.  American obesity, diabetes, cancer, and heart disease continue to rise along with unbearable health care costs.  The destruction of the environment and extinction of species due to the relentless ravaging of the earth for more pasture and more land to grow feed leads to further hidden costs. 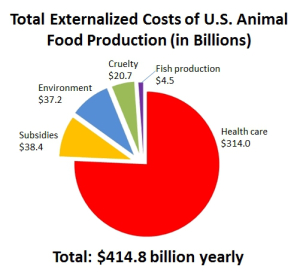 Simon explains, “More than any other microeconomic system in the United States,
meatonomics aggressively shifts the costs of producing its goods onto American taxpayers and consumers. The only word for these costs is staggering. The total expenses imposed on society—that is, production costs not paid by animal food producers—are at least $414 billion. These costs are not reflected in the prices Americans pay at the cash register. Rather, they are exacted in other ways, like higher taxes and health insurance premiums, and decreases in the value of homes and natural resources touched by factory farms. For every dollar in retail sales of meat, fish, eggs, or dairy, the animal food industry imposes $1.70 of external costs on society. If these external numbers were added to the grocery-store prices of animal foods, they would nearly triple the cost of these items. A gallon of milk would jump from $3.50 to $9, and a store-bought, two-pound package of pork ribs would run $32 instead of $12.”

So Simon joins Rao and so many others in saying that ending animal agriculture and transforming our actions to vegan, nonviolent living is within our grasp and absolutely necessary in order to save the earth.  There is hope.  At Rao’s Climate Healers.org website, he explains their mission to heal the Earth’s climate.   He states that the biomass of livestock on earth is now three times greater than the biomass of human beings and more than five times the biomass of all wild animals that were on earth prior to animal agriculture and the human caused destruction we see today. 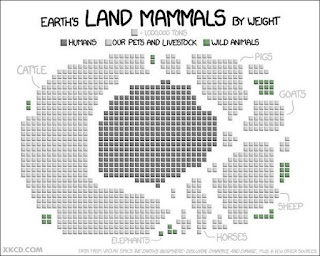 Rao believes that by living vegan, we can reforest and rewild the earth.  Professor Atul Jain and Shiije Shu, of the University of Illinois specialize in land carbon studies.  They used the Integrated Science Assessment Model (ISAM) “to estimate that recovering forests can sequester 265 GtC if everyone goes vegan, which is more carbon than the 240 GtC that humans have added to the atmosphere in the entire industrial era!” To put it simply: “A global transition to a simple, vegan lifestyle allows for massive carbon sequestration through rewilding of the planet.” (from climatehealers.org) To see other charts showing how eliminating animal agriculture can help heal the earth, please check out climatehealers.org.

We can halt animal agriculture in its mindless, soulless march across the land and seas by not buying those products.  Rao quotes a member of the Ianomami tribe who said to a visiting scientist, “Doesn’t the white man know that if he destroys the forest, the rain will end?”  He said he learned this from the Forest Spirit.  Science is now catching up with that Spirit and agrees.  The man who deforested that little acreage pictured above doesn’t realize he is part of a global, planet destroying enterprise.  He is just doing what he and his family have done to survive.  But survival like that for a few is causing massive destruction, suffering and death around the world..

While it seems as though time is terribly short, we must not despair. We have knowledge.  We have the power to stop the animal agriculture behemoth. We do not have to wait for laws to change or governments to take action.  We understand that it is our consumptive behavior that causes this cancerous “growth.” In my book Peace to All Beings I envision our species becoming Homo Ahimsa (meaning nonviolent human).  Rao envisions us as emerging butterflies.  We will leave a healed and peaceful planet to our children and the children of all nature, because we can and because we must.

© 2016, Judy Carman, M.A., is author of Peace to All Beings: Veggie Soup for the Chicken’s Soul and co-author of The Missing Peace: The Hidden Power of our Kinship with Animal;  2014 winner of the Henry Spira Grassroots Animal Activist award; and owner of a truck and a car powered by used veggie oil and house and a Chevy Volt electric car powered by solar. Her primary websites are circleofcompassion.org and peacetoallbeings.com.