Here is my summer article for "Planet Kansas," the Kansas Sierra Club magazine

Clues to Changing Minds and

One extinction every seven minutes
What caused the extinction of the great dinosaurs?  No one knows for sure, but we do know it’s not the same cause that is currently leading to one species of plant or animal becoming extinct every 7 minutes.  That’s the figure we hear from the United Nations Environment Programme.  And this time we are the cause.

Meanwhile, the G7 Summit committed to reducing fossil fuels by the end of the century.  The Environment News Service in their June 8, 2015 article “G7 Leaders promise ‘urgent’ climate action,” stated “Leaders of the G7 nations today pledged to take ‘urgent and concrete action’ on climate change this year, including a new legally-binding climate agreement to be hammered out at the UN Climate Summit in Paris in December.

“In a communique issued at the end of the G7 meeting in Kruen, the leaders said they are committed to cutting greenhouse gas emissions by 40 to 70 percent by 2050, compared to 2010 levels, and decarbonizing their economies by the end of the century.”  So let’s see, at the rate of one species every 7 minutes for the next 85 years, who will remain?  What species will still be here?  Can human beings even survive with nature so out of balance?

Clearly, we cannot sit back and wait for big Gov and big Industry to save us.  While we are applauding them for their efforts, we have to proceed with the belief that we can, ourselves, turn this ship around. But how do we convince the general population that they have the power to do this?

What can we do to stop it?
I recently watched a Youtube called“Backwards Brain Bicycle”—a video produced by “Smarter Every Day.”  It’s short and well worth the time to watch.  In it Dustin challenges himself to learn to ride a bike that is modified so that if you turn the bike handles to the left, the wheel turns to the right.  He thought it would be a cinch to learn how to ride it, but it took him 8 months to alter his neural pathways through practicing 5 minutes each day.  He talks about learning a “deep truth” through this experiment.  He proposes that our thinking becomes very rigid especially as we grow older.  We may want to change something in our thinking, but it takes tremendous effort, and we have to really want to change.  Something has to make us think it is worth it to go to the effort to change.  Simply put, Dustin says, “Knowledge is not understanding.” We often think we understand when in fact we are simply operating from pre-programed assumptions that we haven’t yet questioned.  What we think seems like the truth, but is it?

“Truth is truth no matter what you think about it.”
For example, millions of people may “know” that the rate of extinction is astronomically high, but they may not “understand” that.  As Dustin puts it, “Truth is truth no matter what you think about it.”  So one of the reasons we have so much trouble convincing people to take personal actions to save the planet and all who live here is because of these rigid neural pathways that lead people to contribute to planetary destruction and refuse to acknowledge our part in it.  On my walks on country roads I find broken beer bottles, half eaten burgers in paper bags, half empty pop in plastic glasses with straws, and, of course, plastic grocery bags—all tossed out windows of cars speeding down the road.  And I see new tossed trash every day. Most of these people are young enough to have heard the “Don’t Litter” message in grade school.  What happened?  Maybe it’s a rigid thought pattern from pre-industrial, pre-plastic-bag tribal days when your only discards were nut shells, fruit peelings, ropes made from vines, and temporary biodegradable dwellings. Drop it anywhere and who cares! But one thing we know—it is definitely a deeply furrowed pathway in brain pathways that says it’s still ok to litter.
What people do (and can stop doing) to cause extinction
As important as the littering problem is, especially to the animals who die eating it, it pales in comparison to the impact of eating products from animal agriculture. Let’s think about habitat destruction and extinction of species while considering these facts:

As Always—the Good News
As I’ve said in every article I’ve written for this column, animal agriculture is one area in which we human beings can have the most massive and immediate impact on saving the earth, the species who are facing extinction, and—oh yes--ourselves. We can gain knowledge from reading those statistics, but can we understand what is really happening here?  More importantly, can we change our rigid brain patterns and help others do so along with us, and can we do it in time?  It is hard to change those brain pathways that have been passed along by genes, traditions, and lifestyles for generations.  But it can be done. Whether we are learning to ride a Backwards Brain Bicycle or understanding that animal agriculture is so destructive that it must be stopped—we have the capacity to do it.    This profit-driven behemoth is exterminating millions of species; polluting land, water, and air; and causing immense suffering to the farm animals themselves, the wild animals whose habitats are invaded or destroyed, and to us because of all the illnesses caused by animal agriculture and by eating its products.

Imagine freeing up 80% of total “agricultural” land from animal agriculture and eliminating the pollution, erosion, desertification, deforestation caused by it. If we look at this chart, we see that we can obviously grow enough plant food for people on a lot less than that 80%.  If you figure you can feed an average of 15 people a plant based diet on 2.5 acres and only one on a meat based diet on the same amount of land, then we would need only one fifteenth of the land to feed people. The rest of that land can be returned to its natural state and provide healthy ecosystems for those who need them so desperately if they are to survive. 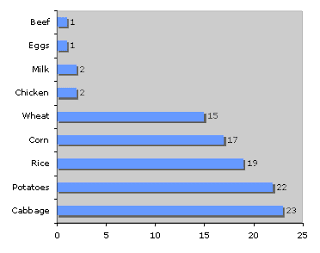 .
On Vox.com a National Geographic Map (2014) shows that “55 percent of the world's crop calories are actually eaten directly by people. Another 36 percent is used for animal feed. And the remaining 9 percent goes toward biofuels and other industrial uses.” However in the United States, only 27 percent of crop calories are eaten by people, while more than 67 percent of crops are fed to farmed animals. Ethanol and other biofuels make up some of the remainder.  Twelve calories of a chicken require 100 calories of grain.  The same amount of grain produces only 3 calories of meat from a cow.

Reading these facts and figures is part of creating new neural pathways, new ideas, innovative ways to save the earth, and most importantly, a desire to do so.  As activists, we need to share what we know.  When people argue or deny what we are saying, they are responding to brain pathways that have been laid down for generations.  It’s hard to try new things, to ride a different kind of bicycle, but if we are going to stop this destruction dead in its track, we can.  Adopting a plant based diet is the simplest, most far reaching, and most powerful action we can take.


Yes, it helps the earth for us to ride our bikes more (even backwards bikes) and not to litter, but the benefits to causing the extinction of the T-Rex of Animal Agriculture are vastly more far-reaching and healing.
Let’s cause the extinction of destruction instead of the extinction
of living beings who share this earth with us.

“To be hopeful in bad times is not just foolishly romantic. It is based on
the fact that human history is a history not only of cruelty, but also of
compassion, sacriﬁce, courage, kindness. What we choose to emphasize in this
complex history will determine our lives. If we see only the worst, it
destroys our capacity to do something. If we remember those times and
places—and there are so many—where people have behaved magniﬁcently, this
gives us the energy to act, and at least the possibility of sending this
spinning top of a world in a different direction. And if we do act, in
however small a way, we don’t have to wait for some grand utopian future.
The future is an inﬁnite succession of presents, and to live now as we think
human beings should live, in deﬁance of all that is bad around us, is itself
a marvelous victory.”

Posted by Judy McCoy Carman at 12:49 PM No comments: